HISTORY OF THE GOLD HILL HOTEL

Rooming house, private residence, bar, brothel, periods of non-use- for 152 years, this solid structure has steadfastly survived against all odds. Once again a thriving full-service rooming, dining and drinking establishment, the Gold Hill Hotel is the oldest hotel in the state of Nevada.

The Gold Hill Hotel began as “The Riesen House”- popular notion is that it dates from 1859, but 1861 is more accurate. Gold Hill’s population grew from 638 in August 1860 to 1,297 in July 1861, four months after the creation of the Nevada Territory. Hotels and boarding houses were in great demand and records show that in July of 1861, the Riesen House was under construction.  In the winter of 1861/1862 there were floods across northern California and Nevada. Melting snow and unprecedented rains filled ravines and canyons with torrents of water.

On 27 Jan. 1862 the Alta California quoted an article from the Territorial Enterprise of 13 Jan. 1862: “…the southwest and southeast corners of the Risen

[sic] House, a fine structure, have fallen, but the main part of the building remained firm.” Gold Hill Historian Maitland Stanley wrote, “I am positive the photo is an 1862 photo showing workmen repairing the south side of the Riesen House and not a photo of the structure being built.” The photo is a Lawrence and Houseworth Co. production and is dated 1862.

Horace M. Vesey acquired the hotel in late 1862 and added a wooden structure to the south of the original stone building, as seen below. The popular hotel became an important part of the thriving metropolis of Gold Hill, hosting many Comstock social events such as “Vesey’s Ball,” an elaborate 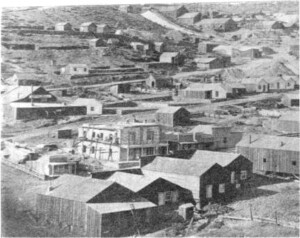 cotillion party in 1863. This hotel bore witness to many events. Miners from Gold Hill and Virginia City first assembled in front of the Vesey House on August 6, 1864 to adopt a constitution in the first attempt in the West to organize. Jabez Spencer shot and killed James Murray in front of the Vesey House August 26, 1871. On December 26, 1873, Thomas Miller attempted to settle his bill by shooting proprietor James Lowery–Lowery ducked in time.

A favorite anecdote from the Gold Hill News on June 21, 1871, entitled:

“About 6 o’clock last evening, a terrific crash resounded from the Vesey House, inducing everybody to rush wildly tither from all parts of town. The cause was as follows: a large, new engine of 60-horsepower [steam engine], for the Yellow Jacket south works, came into town loaded upon the “back-action” of a huge team, and passing up the steep cross-street to the works, had just made the turn up Telegraph Street when the chain attaching the back-action to the forward wagon broke.
“The back-action with its ponderous load started immediately downhill, stern foremost, and would have smashed directly into Odd Fellows hall, had not a man caught hold of the tongue and directed the runaway wagon towards Main Street. It directly got such strong sternway on, however, that he could not control it, and in another instant it pointed itself full tilt toward the Vesey House, which it struck with ponderous force about the centre of its broadside, crashing directly into the dining room.
“The boarders were all at supper, the tables being filled, but seeing through the windows this rampant engine charging upon the institution, they jumped lively and got out of the way just as the thing crashed through, carrying a goodly portion of the side of the building with it. Nobody was hurt, but some dishes got broken, and grub, pickles, sauces, etc. were distributed about the floor reckless of cost.

“Neither wagon nor engine were injured in the least by this forible “housing”, and shortly afterward the team hitched to the tongue, snaked the formidable intruder out, and left a good job for a carpenter to repair damage. It was a right lively sensation while it last, and it was very lucky that no one was hurt.”

Gold Hill was adjacent to the even larger industrial and business center known as Virginia. The combined population of the two towns passed 15,000 in early mid-1860s, becoming one of the largest cities in the West, with schools, opera houses, newspapers, trains, factories, churches, fire departments, police forces, and all the other trappings of a settled community. All this was in addition to the major mining operations, which were producing headline-grabbing amounts of silver and gold. By the mid-1870s, the combined population of Virginia City and Gold Hill reached 25,000. The mining boom continued through the decade, but after 1880, a cycle of booms and busts caused the population to dwindle until, by the 1930’s, only a few hundred called the Comstock home. By 1907, the Gold Hill Hotel was being used as a private residence.
Those who built a major mining district (with all that meant) were faced with the choice of staying or leaving; those who lingered faced complete ruin with too few means for income. The Comstockers who remained were left to scrounge the ruins, and they often dismantled buildings for firewood. What had been the pride of the West became an eyesore or just dust and ruins. Sic transit gloria…glory fades. 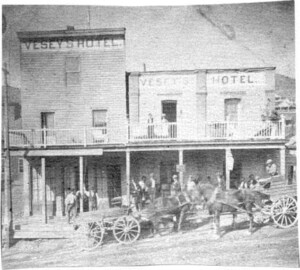 Fortunately for us, enough remains that one can envision the glory of the better times; modern day Virginia City and Gold Hill are fascinating destinations to absorb the history of the mighty Comstock.

The photo on the right dates from the mid 1860s. The wood structure on the left disappeared sometime prior to 1890; the right hand building survived and is the core of the current Gold Hill Hotel. 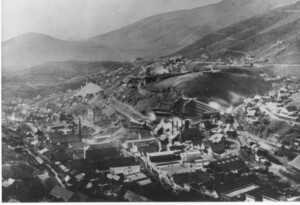 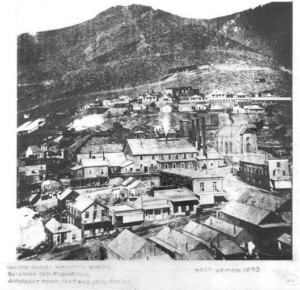 Famed photographer Carlton Watkins captured this view of Gold Hill around 1877 close to the peak time of mining activity. Today only a few of these buildings exist.

The trestle of the Virginia and Truckee railroad can be seen almost in the middle of the picture…below it is St. John’s Episcopal Church and the hotel is between St. Johns and the steeple of St. Patrick’s Catholic Church to the left. The Vesey Hotel fronts the main street.

The picture of Gold Hill to the left is dated March 1873 and is of Gold Hill, Nevada. The population at this time was around 8,000 or so. The current population of the same area is at best a few hundred people.

The smoke stacks are of the Yellow Jacket Mine hoisting works. To the right of that is the St. John’s Episcopal Church, and the hotel is just in front of the church. 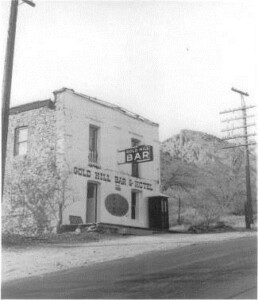 The photo on the right is the hotel and bar in the early 1950s. Note that the bar addition on the right side had yet to be constructed and that the porch is off the front of the hotel.

By this time the population of Gold Hill was less than eighty people and the town no longer had its own post office. It was included as part of Virginia City, which was itself down to a few hundred. The structure has been known as the Gold Hill Hotel (with varying inclusions of the term “bar” or “saloon”) at least since 1958 when the property was acquired by Fred and Dorothy Inmoor.

The present wood structure (which houses the restaurant, kitchen, front desk and 8 spacious rooms) was added as part of a renovation in 1987, shortly after Bill and Carol Fain acquired the property. The Fains were the owners and regular innkeepers of the Gold Hill Hotel for 25 years, retiring and selling to the Comstock Mining Company in 2011.

Sign up to receive the latest news, event information and deals!